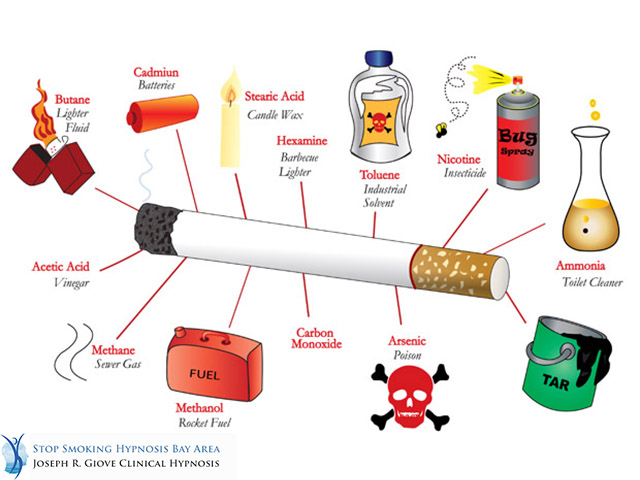 It is no secret that smoking cigarettes, pipes, cigars, smokeless tobacco, e-cigarettes and all other tobacco products are dangerous to your health and potentially fatal. Scientists and researchers have examined in great detail all of the chemicals involved in the manufacturing of cigarettes, and have laid out many of the troubling outcomes of prolonged cigarette use. This article will focus on the most alarming of these.

The Harmful Chemicals in Cigarettes

A cigarette is more than just tobacco rolled in paper, in fact there are more than 7000 chemicals that are released when a cigarette is lit and smoked. Additionally, more than 600 ingredients go into the farming, manufacturing and production of cigarettes. Obviously there are too many to list here, but here are some of the more common and most harmful components:

These are just a few of the ingredients that can be found in cigarettes. There are many, many more, all with varying side effects and complicated names that obscure their harmful effects. Cigarettes have warning labels on them but they are often not nearly specific enough. Most of the household or industrial products that contain these same chemicals carry warning labels stating that consuming these products are harmful to your health, some even list the number for poison control. Meanwhile, warnings on cigarette packages simply carry a mild warning of lung cancer or potential impotence.

E-Cigarettes: Not a Safe Alternative

E-cigarettes are a nicotine delivery system. They heat flavoured nicotine (and many of the other dangerous chemicals found in cigarettes) with a battery operated ignition. Puffing an e-cigarette activates the heating device which then vaporizes the flavored liquid, and the user then inhales. This process is called ‘vaping’, and although it is often touted as a safer alternative to smoking, it nevertheless makes use of the aforementioned chemicals also found in cigarettes.

Studies from the Harvard School of Public Health found at least one of the most toxic chemicals found in regular cigarettes in over 50 flavors of e-cigarettes. These chemicals are diacetyl, acetoin and 2,3 pentanedione. In a quote from the report, author Joseph Allen says “the amount of diacetyl in 39 of the e-cigs exceeded the amount that was detectable by the laboratory.” This means the amount was too great to even measure, and as such we are unable to determine what effect such an unfathomable amount would have on a person’s health.

The test results regarding e-cigarettes are only now becoming available to the public, and they are showing us that the risks associated with e-cigarettes are at least equivalent to, and in some cases greater than conventional cigarettes. Big tobacco companies have found a way push these products onto the public with the message that e-cigarettes are a ‘healthier’ alternative, or even an effective way to quit smoking. “Vaping”, which is what smoking an e- cigarette is called, may seem like a healthier alternative to a conventional cigarette, but they contain many of the same chemicals, as well as additional chemicals, often in significantly higher concentrations. One of these chemicals, found in the flavoring component of several e-cigarettes, is formaldehyde, and will therefore not only cause addiction but also severe lung damage.

Secondhand Smoke and Our Youth

The damaging health effects of smoking cigarettes by smokers aside, there is significant danger from secondhand smoke, particularly for children. Any time parents, teachers, babysitters, grandparents or anyone else smokes around children or youth, it is a tragedy. Children are not only susceptible to the horrific health risks that come from secondhand smoke, but are also influenced by behaviors of those around them, especially their parents.

Youth are starting to take up smoking at younger and younger ages, due to peer pressure, advertising on TV, or because they have a parent who smoked. E-cigarettes are being offered in flavors such as cotton candy and fruit squirts, making smoking more appealing to those under the age of 18. Most wish later in life that they had not started smoking, and find it difficult to quit.

Everyday, more than 1800 youth and adult casual smokers become daily smokers. Many of these people were one of the 3200 people who smoked their first cigarette before they were 18 years of age, or even younger. The addictive characteristics of cigarettes and other tobacco products means that nearly 7 out of 10 adults now want to quit smoking but only about 4 in 10 have made an attempt to quit.

Smoking Causes Many Forms of Cancer

Smoking cigarettes can cause and exacerbate all forms of cancer. Some of the leading cancers that can come from prolonged smoking are cancer in the lungs, mouth, throat, kidney, liver, stomach and colon. Smoking can also cause acute myeloid leukemia. These are only a few of the disastrous long term cancerous effects of smoking.

There Are No Safe Ways to Smoke

Many people think there are safe ways to smoke. There are not. Smoking tobacco and nicotine will always be harmful to your health. Waterpipes, hookahs, pipes, bidis, and kreteks are all different ways of smoking tobacco. These methods use different methods to ingest the smoke by using water or other seemingly ‘natural’ products, but still have the same dangerous and cancerous effects that come with smoking conventional cigarettes.

Youth and adults alike are not receiving proper health information regarding the risks and dangerous effects of cigarettes, e-cigarettes and other tobacco products. Problems associated with smoking do not just affect the original smoker, secondhand smoke is passed on to other people, including people’s own children. Surely this is reason enough to make an attempt to quit.

One of the most effective tools for those wishing to quit smoking is the proven method of Clinical Hypnosis. Licensed Hypnotherapist Joseph R. Giove has over 25 years of experience working to help people of all ages leave cigarettes behind for good. His methods are unintrusive, and pose no additional risk factors such as increased carcinogen or chemical intake that come with other quitting smoking methods. Joseph R. Giove Clinical Hypnosis provides the tools to help rewire your brain so you are no longer dependant on cigarettes, allowing you to live a healthier, smoke-free lifestyle that benefits both you and everyone around you.