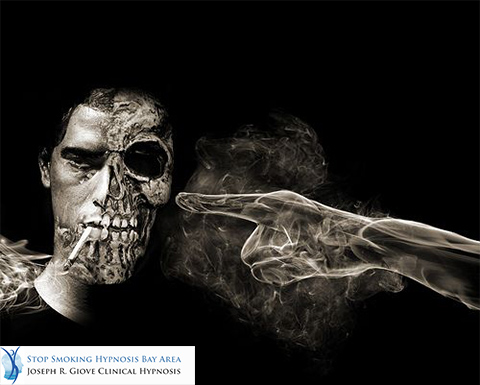 Smoking causes more deaths per year than murder, suicides, AIDS, car accidents, and alcohol and drug use in the United States.

This equates to more than 480,000 deaths per year. Most of these deaths are caused by the direct effects from smoking cigarettes. However, secondhand smoke is also a major factor in smoking related deaths and both will be discussed in this article.

Another term for secondhand smoke is “passive smoke.” This is a term that has been created by the big tobacco companies in an attempt to soften the concept of “secondhand smoke.” Smoking related diseases such as cancer, lung disease (COPD) and heart disease are the major factors that contribute to this incredibly high number of deaths per year in the United States.

This article will discuss these numbers, as well as worldwide statistics, secondhand smoke deaths, and how Clinical Hypnosis and Hypnotherapy can help decrease smoking related deaths.

Smoking cigarettes directly contributes to the development of cancer-causing cells. Nine out of ten instances of lung cancer are caused by smoking cigarettes.The damage done by smoking is two-fold, not only does cigarette smoke cause cancer, but it also weakens the immune system so the body cannot properly fight the damaged cells. The cancer can then spread freely throughout the body without being stopped by the body’s natural blocking systems.

Over 7300 people die each year as a result of someone else’s smoking, whether by cancer or any number of other smoking related diseases. Secondhand smoke is an entirely preventable problem, and help to quit smoking is always available. Joseph R. Giove can help curb this epidemic using Clinical Hypnosis and Hypnotherapy, one of the most effective methods of smoking cessation.

In the United States alone, 480,000 people die each year from smoking and smoking related illnesses. Despite the numerous warning labels, advertisements, public service announcements and disclaimers on cigarette packages, the death toll nevertheless continues to increase every year.

The US government has put in place enhanced regulations to restrict cigarette advertising in television, movies and print, and they might have helped. However, these restrictions have forced the American tobacco companies to go overseas and prey on developing countries in order to sell their products.

According to the American Cancer Society, approximately 6 million people worldwide will die this year due to tobacco use. By 2030, that number will be 8 million. These numbers are appalling in of themselves, but here is an even more appalling number: 83. That is the percentage of the 8 million people who will die that reside in low- and middle-income countries.

Just because the advertising restrictions are working in the United States doesn’t mean it is being applied elsewhere. Tobacco companies are clearly preying on lower-class families around the world.

Of the 480,000 deaths in the United States, nearly 48,000 were caused by secondhand smoke. Merriam-Webster’s Dictionary and Thesaurus defines secondhand smoke as “tobacco smoke that is exhaled by smokers or is given off by burning tobacco and is inhaled by persons nearby.” According to the Center for Disease Control (CDC) when children are exposed to secondhand smoke they can experience the following conditions:

The health effects from secondhand smoke in adults are equally catastrophic. They range in severity of the following symptoms:

Secondhand smoke is an extremely dangerous side effect of smoking nicotine, and one that nonsmokers have little control over. While children are the most susceptible, anyone can develop the serious conditions associated with secondhand smoke.

A person smoking nicotine for their own personal abuse is one thing, but when it is affecting an innocent bystander, or worse, a child whose parents smoke, it is quite another. Children and others who unwittingly ingest secondhand smoke are victims of the people who smoke on a regular basis.

Chronic Obstructive Pulmonary Disease basically means that a person will have difficulty breathing normally. It is also a progressive disease, meaning that the more a person smokes, the worse this condition will get.

People whose lungs are affected by COPD have trouble breathing due to the damaged air sacs in the lungs.

Other symptoms of COPD include the following:

COPD is a disease caused by smoking nicotine for prolonged periods of time. The two main symptoms of COPD are emphysema and bronchitis. These diseases are incurable and can only be slowed by the cessation of smoking. COPD is the third leading cause of death in the United States and many people are not even aware they are afflicted with this disease.

Quitting smoking with Clinical Hypnosis and Hypnotherapy is the most effective option to quit smoking for life.

It is no secret that smoking cigarettes and nicotine in any form will increase the likelihood that a person will contract heart disease, lung cancer, diabetes, and any number of fateful diseases associated with smoking.

The numbers do not lie. When people start smoking cigarettes, their overall health decreases quickly. To stop or slow down these symptoms, people need to quit smoking all together. Joseph R.Giove can help people quit smoking using the power of the mind with Clinical Hypnosis and Hypnotherapy.

Joseph R. Giove is a licensed Clinical Hypnotist with over 30 years of experience in assisting people with their smoking cessation efforts. He uses no additional chemicals or carcinogens that other methods of quitting smoking utilize. If you do not wish to be part of these alarming statistics then Joseph R. Giove can help you quit smoking for life.