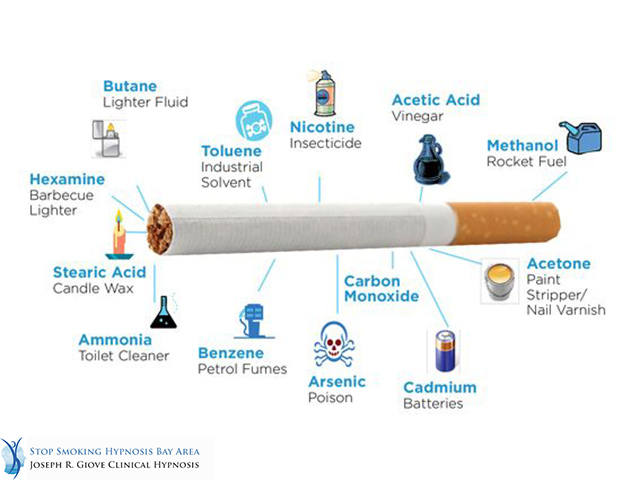 It’s no big secret that smoking cigarettes is one of the most harmful things you can do to yourself. Even secondhand cigarette smoke can have a dramatic impact on your health, and smoking can directly lead to cancer, heart disease, respiratory disease, and even impotence. Simply put, smoking kills.

Because of this, the use of cigarettes has fallen drastically over the last several years. As more research shows the dangers of smoking and more resources exist to help people put down the cigarettes for good, more and more citizens are finally giving up this habit.

However, here at Joseph R. Giove Clinical Hypnosis I’ve noticed that many smokers out there who still smoke do so in part because they don’t fully understand everything that is actually in a cigarette. There’s a lot more to a cigarette than just some nicotine and tobacco, and when you stop to take a closer look at what’s in them you may see why it’s well worth taking the initiative to finally stop smoking.

Before we get into the surprising ingredients, let’s talk about the basic ones that you’re already aware of. In general, there are two main ingredients that form the foundation of cigarette ingredients – tar and nicotine.

These two ingredients are what most talk about when they talk about the ingredients in a cigarette. But there are many more you need to be aware of – including a lot that might surprise you.

Now we’ll talk about something many don’t realize – additives are a part of virtually every cigarette you smoke. While most assume that it’s just tobacco, nicotine, and tar, research has shown time and time again that cigarette companies add plenty of different compounds and chemicals to their tobacco products – in fact, about 600 additives are legal to add to tobacco products.

What additives are we talking about? Here’s a partial list of a few examples of what is included in a cigarette:

Those sound tasty, right? But the reality is that while it might be great to eat cocoa or sugar, you don’t normally smoke it, do you? As ingredients burn they go through a chemical change, and that chemical change can negatively impact your health. For instance, chocolate is delicious, but when cocoa is burned it actually creates bromide gas – which you inhale.

That bromide gas is added not for flavor, but because it dilates your airways. This in turn helps increase the amount of nicotine they can absorb. The same goes for menthol. Sure, it might seem like it’s just there for added flavor, but the reality is that it is placed in a cigarette to help numb the throat and make it easier for you to inhale.

Are you seeing a trend? You should be – tobacco companies have spent decades and millions of dollars making sure that they deliver nicotine to the body perfectly to increase your addiction and in the process, boost their bottom line.

The Purpose Of Added Ingredients

Tobacco companies add various compounds for one simple reason – to make a more effective product. We mentioned menthol and cocoa above, but what about more dangerous-sounding compounds that people often don’t realize are in their cigarettes? Think about the following:

In fact, there’s even evidence that the tobacco used in today’s cigarettes has been genetically modified to increase nicotine levels dramatically and ensure that you stay hooked on them. 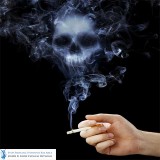 One of the biggest problems associated with what goes into cigarettes is that the sweeteners and other flavorings added to cigarettes haven’t been fully disclosed or understood for years. Flavoring chemicals are known as alkenyl benzenes, and they’re added to tobacco products to help increase the flavor profile and make them more ‘enjoyable’ to smokers.

These flavoring chemicals are often added to foods and are completely safe in that form since the liver eliminates the toxins with relative ease. But smoke enters the lungs, and the chemicals spread through the body before the liver can do anything about them. When this occurs, the increased risk of cancer and lung damage is dramatic.

Recent studies have found that 68 brands of cigarettes on the market today contain five different types of alkenyl benzenes, each in varying levels. In short, these chemicals are just now being understood and it’s highly likely that many smokers have exposed themselves to them without even realizing it.

The Dangers Of Additives

You likely already know how dangerous nicotine and tar can be. But when you consider the different ingredients that are added to a cigarette in relative secrecy, it becomes apparent that smoking is even more dangerous than you might think.

Stopping smoking is one of the single most important things you can do to improve your health. The tobacco companies aren’t going to stop putting additives in their products, so the only option to protect yourself is to put down the smokes.